Theater workshops in Cameroon: a success for the children of the orphanage! 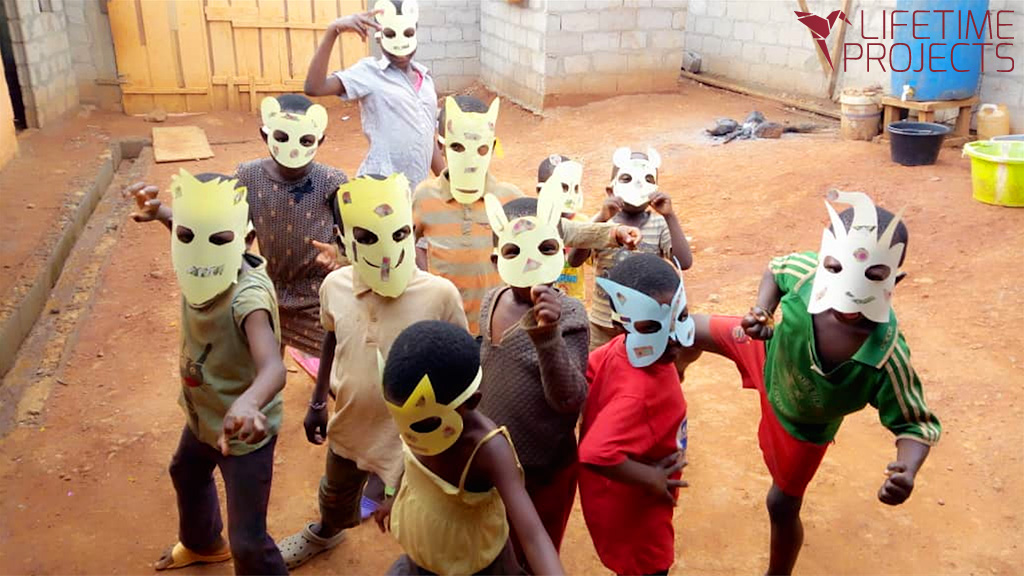 With the help of our volunteers, LifeTime Projects’ team in Cameroon is developing art therapy activities in orphanages. Since early January 2019, they have been running theater workshops to help children communicate in a different way. They learn to express themselves, not to be afraid of other people’ s perceptions. It also helps them to manage their stress and feel more comfortable with their bodies. In other words, theater provides them with essential support to grow in a positive way. The team in Cameroon tells us about it…

« For our first theatre workshop at the FACT orphanage in Yaoundé, we had to get in touch with the children and put them in the atmosphere of the theatre. It was necessary to create in them a wish to have fun and express themselves through theatrical play.

The first step is the individual introduction of each child as well as the educator. Then everyone had the opportunity to give themselves a “stage name”. We quickly realized that many children take names from movie or music celebrities based on their passions, skills or dreams

After the introductions, we offered a song to the children. The principle was as follows: each child had to take turns giving a verse of his or her choice, inspired by what he or she experienced at the orphanage. It allowed the children to have fun singing, while expressing their daily experiences.

At the end of the workshop, we suggested that they do a little play. They were immediately enthusiastic about performing! The children were able to choose roles and we helped them organize the play in order to create a logical and coherent story. The following roles emerged from this work phase: wife, husband, four children, neighbors. Thanks to these roles, we were able to build a plot. “The wife already has four children and her husband is very poor. She demands that he take responsibility for himself because he is the one who decided to have so many children when they are poor. While she is doing it, the first three children each explain their problems to their father. When the father is overwhelmed, one of the neighbor comes to make fun of him because he finds him miserable. Then, the other neighbor comes and reminds the first neighbor that he too cannot take care of his children.”

After a few rehearsals, a restitution was made in front of all the other children, the orphanage staff and LifeTime Projects’ team. Then, we agreed on another theater workshop the following week, at the request of the children! »

« We had an appointment at the Mount Sinai orphanage with the children for our theater workshop. We arrived at 2:30 pm and found the children waiting impatiently for us. But this time, we built our workshop in several steps:

The warm-up: it was done through games and songs to get the children in shape! They were able to create a song through which everyone introduced themselves. After the introduction, we brought a game of reflexes, where everyone had to master the names of the different members.

The technique of creating a character: we brought the children to create a fictional character. Each child had to let their imagination run wild. To do this, we first suggested that they choose an animal they wanted to be. Then the role of a character in society.

The characters’ encounter: we formed two groups in order to put together plays of 3 minutes each with the children.

At the end of these workshops, the children were able to put together a play. One group chose to perform on the theme of churches, the other group turned to a musical. A short performance was then given to conclude the workshop. And an appointment was made for the following week! »

« As scheduled, we returned to Mount Sinai and found the children waiting impatiently for us. We immediately started with the warm-up, in order to put the children in the right mood.

We reviewed how to create a character, then repeated the plays created the day before. The children played individually and then in groups, which allowed us to improve the mini shows they put on. Then, at the request of a mother from the orphanage, we suggested that the children play their sketches during Youth Week. So the children repeated until they were ready for their performance! »

You are inspired by this mission and want to join the adventure?

Art-therapy in orphanages in Bolivia: see the mission in details

Art-therapy in orphanages in Cameroon: see the mission in details